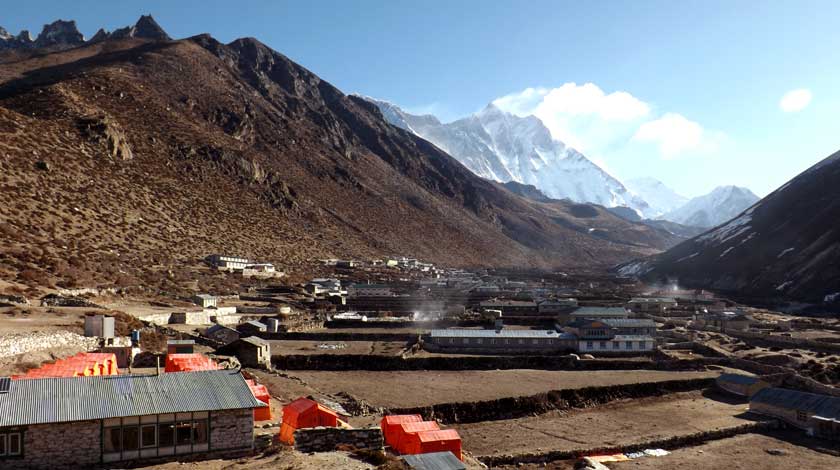 Dingboche is the last sherpa village of the Khumbu Region

Dingboche is the best place to rest during the Everest base camp Trek, Dingboche is the ultimate sherpa village of the Everest region one of the most popular trekking destinations where Sir Edmond Hillary and Tenzing Norgay Sherpa set foot on the summit of Mount Everest. As the village lies 4410 meters altitude above sea level, it is one of the most charming Sherpa villages of the Khumbu region in northeast Nepal valley, and one of the best places for trekkers and climbers to acclimatize.

Dingboche is the last village in the Everest region, located 9.1 kilometers (5.6 miles) distance from Tengboche monastery and 8.4 kilometers (5.2 miles) distance from Lobuche. There are really not many differences between Pheriche and Dingboche. Both places have similar views of Himalayan peaks and are at about the same altitude. There is a bit less view from Pheriche compared to Dingboche due to its location in the corner. You will have a very short walking distance between these two locations, as there is no significant route difference between these two sites. In comparison with Pheriche, you will have better views of the Island peak and Ama Dablam Himalayan peaks if you stay in Dingboche. our recommendation is that you stay in Dingboche is more beneficial.

As a part of the acclimatization day, you are able to hike to the top of the Nangkartshang peak, which has an elevation of 5,083 m. The walk to reach the top of Nangkartshang peak takes approximately 2-3 hrs, and from the top, you will be able to see the beautiful views of Mt. Tawache, Ama Dablam, Island Peak, Lhotse, Everest, and Pumori. There is also the option of visiting Chhukung Ri (5546m) altitude which is a very popular trekking peak in the Khumbu Valley. In fact, the lower of the two summits is actually located to the left of the saddle. The main summit is actually located in the center of the picture. Taking a look at the lower right corner, we can see the path leading to the saddle. From a ridge just 10 minutes south of Chhukung, you can see Nuptse, the huge mountain in the background.

This is one of the most popular rest places for trekkers, as it is a more warm and friendly hub compared to Pheriche. In fact, the river directly flows from the charming mountain of Island Peak on the east side.

As a town, Dingboche has the postcode 56 002 and area code 338. Dingboche has a library and an internet café that makes use of a satellite link. It is not possible to reach Dingboche by road, so all transportation is carried out by Yak and porters, Because of the high altitude, the climate of Dingboche is always cool, rainy in the summer and dry and cold in the winter.

Also, you can rent climbing gear in Dingboche at the hotel (Hotel Good Luck) for the climbers of Lobuche peak and Island peak. The hotel stocks climbing gear and you can choose what suits your peak climbing needs, such as an Ice axe, harness, two tape slings, two screw gate carabiners, Descender/abseil device, Ascender, Carabiners, climbing boots, etc.

There are 26 hotels in Dingboche and all are excellent lodgings, though Hotel Good Luck is the best and most clean in Dingboche, Mr Kul Tamang, the owner of Hotel Good Luck, is a friendly person and very informative, so its best to book a room in advance. You can reach him at this number: +977-9842868444.

“The Tour Leader Mr Thomas Boehm” Leads 12 peaks trek every year with his group. The peaks name is here